JOE Wilson has spent much of his life reporting on sport for the BBC. From dressage to darts, from Arbroath to Ahmedabad he’s followed the stories. Joe forged a path to journalism having failed in his initial career choices of shoe salesman and non-league goalkeeper. He likes to stare out to sea and wonder if the world is completely as it seems. He often hopes that it isn’t. Joe lives in the east of England with his wife and two children where he is part-owned by a half-poodle. The Island That Didn’t Exist is his first book and it has been shortlisted for The Berkshire Book Award, Shropshire Bookfest and the Bolton Children’s Fiction Award. You can find out more about Joe on his website www.joewilsonfiction.com

The Island That Didn’t Exist: When twelve-year-old Rixon’s great-uncle Silvester leaves him an island in his will, Rixon can’t quite believe it. But the island only exists on an ancient map, and can only be seen with a massive magnifying glass. Is it really there? When Rixon sets off for answers a classic adventure story ensues with wild children, scientific secrets and a battle to protect the future of the planet. 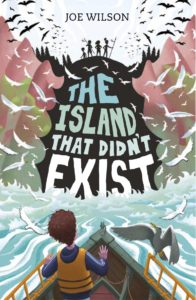