We are thrilled to announce that US rights to Sam Gayton’s new book, His Royal Whiskers have just been sold.

Allison Hellegers brokered a deal on behalf of Becky Bagnell with Annie Nybo at Simon & Schuster Children’s. Sam Gayton’s first book, The Snow Merchant was also published in the US by Simon & Schuster and came out earlier this year under the new title, The Adventures of Lettie Peppercorn.

Sam’s second book, Lilliput was published in 2015 America by Peachtree and his third book, Hercufleas (which came out last year in the UK) will be due out in October 2016 in the US, edited by Anne Hoppe and published by Clarion Books. Which makes three US publishers for Sam’s four wonderful books – a lot of love coming to Sam from America. 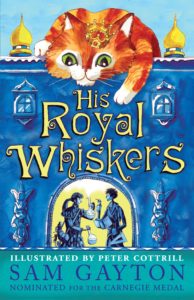