J M Joseph grew up on the East Coast of America before crossing the ocean to Ireland, where he studied for four years and later settled in England. He now lives in Bristol with his wife, three children and two dogs. Fire Boy is his first work of fiction and was published in 2020 by Hachette Children’s Books. Jay is currently working on the second book in the series, Pants on Fire which will be published in July 2021.

Fire Boy tells the story of 11-year-old Aidan Sweeney who receives a mysterious package in the post. He and his two best friends, Sadie and Hussein, eat one sweet each … and suddenly develop amazing superpowers. Sadie can move things with her mind. Hussein can control any electronic device. And Aidan can ignite his body at will – and when he’s on fire he can fly. When they discover the sweets belong to a dangerous criminal who is trying to hunt them down, they have to use all their powers to outwit him. 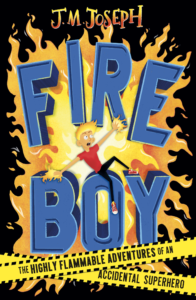