LARRY Hayes is easily distracted. So when he’s not writing books for children he can be found working as an investment fund manager, the trustee for a homeless charity and on Fridays he home-schools his two kids by letting them decide what to study. In the future he hopes to become a treasure hunter, private investigator, inventor of a yoghurt that makes you happy, Olympic croquet medallist and the person who solves the maths behind the human brain.

Eliza and Johnnie’s parents have gone to Mars. Not to the supermarket, not even a trip to the Bahamas. No, they’ve been offered the Chance of a Lifetime and have gone to Mars, the planet, and they’re never coming back. But something doesn’t seem quite right . . .
Taking it upon themselves to save the day, ten-year-old Eliza and her five-year-old genius brother Johnnie manage to cross the Atlantic in an old sofa and navigate their way into outer space. Will they be able to overcome everything that’s thrown at them (including vampire squids, suspicious villains, a secret island and much more)? And – more importantly – will they ever get their parents back? 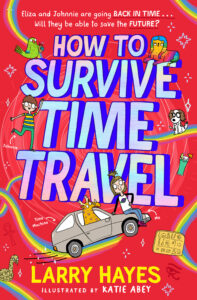