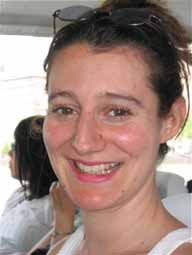 [/frame]Titania Krimpas trained in drama and theatre arts at the University of Birmingham and Central School of Speech and Drama. Before studying for an MA in Writing for Children at Bath Spa she wrote a stage adaptation of The Little Match Girl, for Salisbury Playhouse and The Real Boy, a version of Pinocchio, for RADA & London Primary Schools. She also wrote and directed Beauty Sleeps at the Young Vic, which was translated and performed at the Theater der Jungen Welt, in Leipzig. She has worked with Pentabus and Kindle theatre companies as Dramaturge on their site-specific performance Underland, at Clearwell Caves, with Opera Holland Park on Carmen, and with Michael Rosen and Homemade Orchestra on their R&D for Centrally Heated Knickers Live at The Science Museum.

Her first short story, Zach’s Monster, was published in Scholastic’s anthology ‘Wow 366’, and she was commissioned to write an interactive storybook ‘Something Wild…’ at the Walker Gallery in Liverpool.
Titania is currently working on her first novel for young adults, After the Fire.

To find out more about Titania her website can be found at: www.titaniakrimpas.com