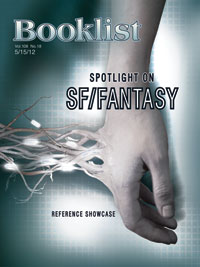 [/frame] Mike Lancaster’s fabulous debut 0.4 has been listed in the top 10 best Sci-Fi/Fantasy books for youth by Booklist and in celebration they’ve put the artwork from Mike’s book on the front cover of their May 15th issue (pictured right).

Booklist is the magazine the New York Times calls “an acquisitions bible for public and school librarians nationwide.” Mike Lancaster is a British author, but his writing has been hugely successful in America where it was published in hardback and is known as, Human.4 – and the paperback is being published later this month.

Mike has written his own post about Booklist and you can find it here http://www.mikealancaster.com/