[/frame]PAMELA Butchart lives in Dundee with her husband, Andy, and their two awesome cats, Bear and Carlos. She teaches philosophy at secondary school, spending her days pondering such questions as “How do I know I’m not really a robot?”
Pamela gets her inspiration from her own childhood which was filled with broken metal detectors, mud pies, haunted primary schools, dinosaurs and exploding balloons filled with rice.
Pamela loves cats, Kinder eggs, funny babies, small dogs, tulips, cheese, dinosaurs and her pug pyjamas bottoms.
When Pamela grows up she’d like to open a luxury hotel for stray cats.  She thinks she’d call it ‘Meowington Palace.’

Pamela is the winner of the Blue Peter Best Book Award 2015 and she has been shortlisted for The Laugh Out Loud Book Awards 2016 and The Children’s Book Award 2016. Her first book was published in 2014 and since then she has had fourteen books published and another two are due out later this year. Her most recent books published in 2016 were Attack of the Demon Dinner Ladies, Pugly Bakes a Cake and To Wee or Not to Wee, a humorous retelling of four of Shakespeare’s most popular texts.

Pamela is also the author of several picture books, Never Tickle the Tiger was published by Bloomsbury and shortlisted for The Scottish Children’s Book Awards 2016. 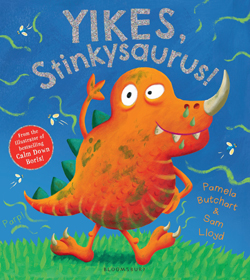 [/frame]Yikes Stinkysaurus!
Stinkysaurus is the smelliest dinosaur in the whole wide world, and don’t the other dinosaurs know it!
“The dinos rushed for cover, when Stinkysaurus was about!
He smelled so bad that just one whiff, could knock a T-Rex out!
He never ever brushed his teeth, so his breath was super-grotty.
And, poo! You won’t believe the smells, that parped out from his botty! Yikes, Stinkysaurus!”

Finally, however, the other dinosaurs decide that the time has come for Stinkysaurus to take a bath. But will Stinkysaurus agree? Find out in this pong-fest of a picture book.
Rights information:
UK Publisher: Bloomsbury,
Publication Date: January 2014
All other rights: Bloomsbury except;
Film and TV rights: Lindsay Literary Agency 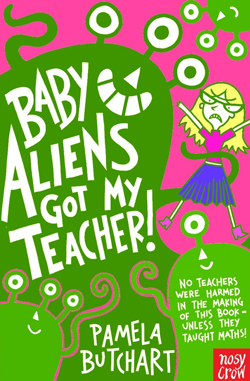 [/frame]Baby Aliens Got My Teacher
One day Izzy and her friends are surprised to find that their teacher, Miss Jones, is actually being nice to them. This is the woman who was caught secretly smiling when Maisie Miller fell off her chair. There can only be one conclusion: she’s been taken over by aliens, and now she wants to make them all aliens too! “One time I found a crisp shaped EXACTLY like Mrs Cunningham who lives upstairs and when I showed Mum she just said, ‘No thanks, you eat it.’ I obviously did NOT eat it, I put it in an envelope and carefully posted it through Mrs Cunningham’s letter box. Because that’s what I would want someone to do if they found a crisp shaped exactly like me (also called a crisp twin).”
Rights information:
UK Publisher: Nosy Crow
Publication Date: January 2014
All other rights: Nosy Crow except;
Film and TV rights: Lindsay Literary Agency [frame] 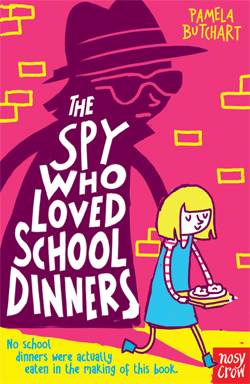