Home » Blog » Blog » The Secret Seven are Back!

PAMELA Butchart has written a brand new Secret Seven story to carry on the celebrated series, The Mystery of the Skull. A huge fan of Enid Blyton, Pamela was commissioned to create a new mystery for her favourite club to solve.

Set in the same world and time as the original stories, this story is brought to life by Tony Ross’s brilliant illustrations.

When asked by her publisher, ‘What did Enid Blyton mean to you as a child?’ Pamela said:

Enid Blyton‘s books were a huge part of my childhood. The Secret Seven books had the biggest impact on me. They helped turn me into an independent reader and were the first series of books I fell in love with. I loved them so much I formed a secret society with the other kids in the block of council flats I lived in. We’d pile outside into the bushes in the communal green and hold our very own secret meetings (complete with picnics of course – that was the best part!). We didn’t have ginger biscuits, rock cakes or homemade lemonade but we did have jam sandwiches, KitKats and plenty of Quavers. 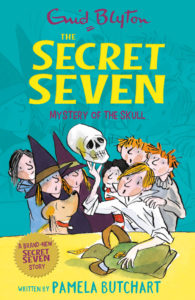