GINA Blaxill has an English degree from Cambridge University and now works in schools liaison, helping teenagers puzzle out the mysteries of higher education. Between the ages of 11 and 15 she wrote an epic 36 part story featuring over 1,000 characters – she still remembers most of their names! Her first novel, Pretty Twisted was published by Macmillan in 2011, her second novel, Forget me Never was published in 2012 and won the Oldham Brilliant Book Award 2013. Gina’s most recent book Saving Silence was published by Macmillan and won the Warwickshire Book Award. Gina is currently working on a new novel. 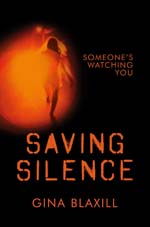 Saving Silence – It’s not easy being the new kid at school. It’s even harder when people want you dead. Sam’s been an outsider ever since he moved to London. A loner from the North who won’t let anyone in. Former head girl and all round school-star Imogen had pretty much given up trying to befriend Sam before that night on Walthamstow high street. The night he wanted to tell her a secret, and someone tried to murder him. But Sam isn’t the only one whose life is in danger. Although she doesn’t know it, Imogen is being watched. And if she doesn’t give these people what they want, they’ll silence her too. Permanently. 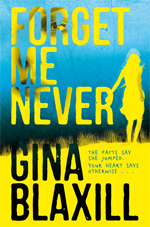 Forget me Never – When Sophie’s cousin Danielle dies after a fall from her balcony, the police dismiss her death as suicide. She had broken up with her boyfriend and had suffered from depression in the past. Sophie isn’t so sure, however, and when she finds a memory stick in a pair of Dani’s old jeans, some new photos and information come to light that point to something more sinister. Sophie and her friend Reece investigate further and soon find out that Dani was involved with something very dark and very dangerous. As Sophie and Reece become more and more deeply involved they put themselves in huge danger too, accessing secret data, facing kidnap attempts and worse. And as they uncover the terrible truth about what really happened to Dani, Sophie and Reece must also face their feelings for each other . . .

Pretty Twisted – Ros has a secret crush on Jonathan. Jonathan is massively hung up on Freya (even after she dumps him). And Freya? Well, Freya is a beautiful enigma. Even more so when she goes missing without a trace . .

Jonathan and Ros met online and when Freya seems to disappear off the face of the earth, he enlists Ros’ (somewhat reluctant) help in tracking down the girl he still loves. With danger lurking around every corner, their stories become inextricably linked in a way nobody could have predicted…

UK Publisher Macmillan Children’s Books,
All other rights: Macmillan except;